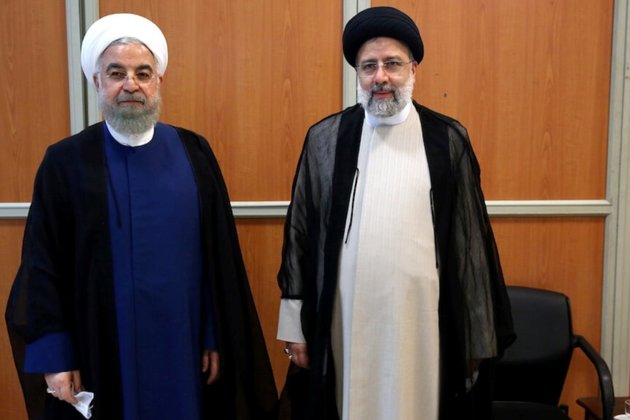 Ebrahim Raisi took his oath before parliament on August 5 to complete the two-step inauguration to become Iran's new president, as Tehran faces an economy battered by U.S. sanctions, a growing health crisis, and difficult negotiations to revive a 2015 nuclear deal with world powers.

A former judiciary chief, Raisi has been criticized by the West for his human rights record and has been under U.S. sanctions in part over his involvement in the mass execution of thousands of political prisoners, as well as over his tenure at the judiciary.

'I will dedicate myself to the service of the people, the honor of the country, the propagation of religion and morality, and the support of truth and justice,' Raisi pledged in the ceremony, broadcast live on Iranian TV

On August 3, the controversial former prosecutor was credentialed by Iran's Supreme Leader Ayatollah Ali Khamenei, marking the beginning of the transition from the presidency of the relatively moderate Hassan Rohani, whose landmark achievement was the nuclear deal with world powers that lifted most sanctions in exchange for curbs on Tehran's nuclear program.

U.S. sanctions were reimposed after then-President Donald Trump withdrew from the deal in 2018, further hurting Iran's economy. Tackling the country's economic woes is expected to be at the top of Raisi's agenda, together with negotiations aimed at reviving the nuclear deal.

Six rounds of nuclear talks between Iran and world powers were held in Vienna between April and June in an attempt to revive the accord. The last round concluded on June 20, with no date set for another.

Highlighting the importance of the ongoing negotiations to revive the deal, EU diplomat and nuclear deal negotiator Enrique Mora is reportedly among representatives from the bloc expected to attend.

Raisi said after his election victory that he backs talks to revive the deal. Russia, one of the signatories of the deal, sent Duma Speaker Vyacheslav Volodin to the swearing-in ceremony in Tehran.

Iranian media said several foreign officials had been invited to the August 5 ceremony, including the Iraqi president and parliament speakers from Niger, Syria, Tajikistan, Tanzania, and Uzbekistan.

Afghan President Ashraf Ghani was said to be attending the inauguration, as well as Armenian Prime Minister Nikol Pashinian.

After the swearing-in ceremony, Raisi is due to submit his proposed cabinet.

In his address after the August 3 inauguration, Raisi said his government will take steps to lift the 'tyrannical' sanctions imposed by the United States.

Raisi also faces an immediate crisis as the United States, Israel, and Britain have blamed Tehran for a deadly attack on an Israeli-managed tanker off the coast of Oman last week and also indicated that Iran was behind an aborted hijacking attempt on another vessel in the Gulf on August 3. Tehran denies responsibility.

Iran is also battling the Middle East's deadliest outbreak of the COVID-19 pandemic, with more than 4 million cases and upwards of 92,000 deaths.

Raisi's presidency will consolidate power in the hands of conservatives following their 2020 legislative election victory, which followed the disqualification of thousands of reformist or moderate candidates.

With reporting by AFP and Reuters