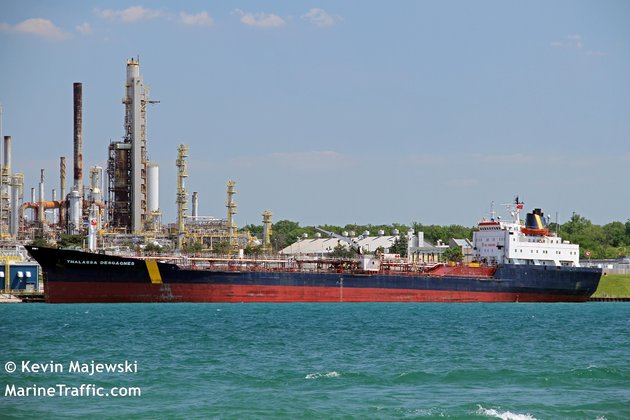 CAIRO - The reported hijacking of an oil tanker in the Gulf of Oman came to an end early Wednesday after commando forces who reportedly captured the ship appeared to let it go. It was not immediately clear which forces were responsible for the hijacking, and Iran denies responsibility.

Arab media indicated that commando forces who were reported to have taken control of the tanker Tuesday, released the ship early Wednesday, resolving the latest maritime shipping incident involving tanker traffic to and from the Persian Gulf.

Maritime expert Salvatore Mercogliano indicated on his website that the Panama-flagged Asphalt Princess appeared to be heading away from the Gulf. He also pointed out that many other ships in the area appeared to be stopped or moving very slowly.

Saudi-owned al Arabiya TV reported Tuesday that "at least five or six ships in the area of the Gulf of Oman appeared to have lost control of their ability to maneuver." It was not immediately clear what caused the problem, or if it was fully resolved.

An apparent Iranian attack on another vessel, the Mercer Street, raised tensions last week after a British and a Romanian working on the ship were killed. Official Iranian sources denied responsibility for that attack, while Israel maintained that it had proof of Tehran's involvement.

Mehrdad Khonsari, a former Iranian diplomat and long-time Iran analyst, told VOA that it is not clear exactly what happened in Tuesday's tanker incidents, but that previous shipping attacks, like the Iranian strike on the Mercer Street, were part of a tit-for-tat between Tehran and Tel Aviv. The Japanese-owned vessel is managed by a London-based company that an Israeli billionaire owns.

"The Israelis have admitted openly that they have carried out more than a thousand missions ... since 2019 against Iranian targets in Syria and Iraq, more lately within Iraqi territory because the Iranians have pulled back from Syria (due to a lack of) resources, to near the Iraqi border with Syria," Khonsari said. "The Iranians also claim for their part that in the course of the last several months there have been at least 12 Israeli attacks on Iranian shipping that have received very little coverage in the Western media."

Khonsari added that Iran is often "unable to respond to Israeli attacks on Syrian territory," such as the one last week on Iranian forces at a Syrian base in the region of Aleppo last month. For that reason, he stressed, "Iran often resorts to actions (like) sending drones from Yemen or places in the Gulf, where Israeli-owned ships are more accessible to them."

Khonsari said he believes it is unlikely that Iran would be willing to link ongoing talks over its nuclear program with regional issues, such as its military presence in Syria, Iraq, Lebanon or Yemen. "(Tehran) might eventually be willing to compromise on its missiles, but not on its regional presence because the strength of Iran," he argued, "is its regional gains, (something) that it's not going to discuss (especially) at a time of weakness and unprecedented demonstrations at home."

Adam Roosevelt, a Gulf analyst based in Dubai, told VOA that Iranian involvement has not been established in the latest maritime incident but that all eyes are nevertheless focused on Tehran because of its previous behavior.

"...We're already in the final stage with Iran," he said. "It's a very tumultuous time. They just got their new leader -- and he's (under U.S. sanctions) for example, so we've got our eyes on them 24/7 regardless of any activity, maritime, cyber or any other domain."

He said that given this latest incident in the Gulf of Oman, more energy will be focused on maritime security and real time intelligence in that domain, as people see a series of different events, including explosions at ports and potential hijacking activity.