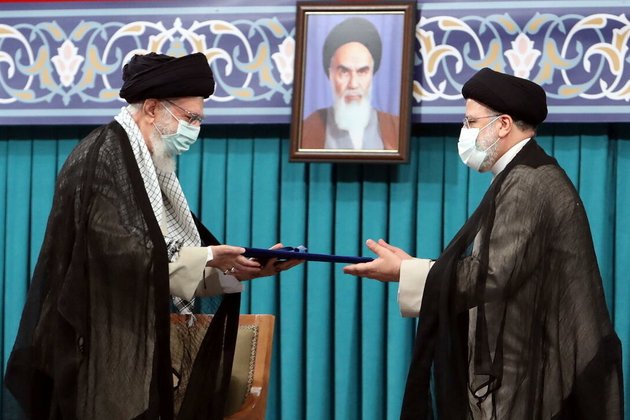 Iran's supreme leader officially endorsed his hard-line protege Ebrahim Raisi as the nation's next president on Tuesday, two days ahead of an inauguration ceremony. It comes at a sensitive time for Iran and the Middle East, under the shadow of the stalled nuclear talks with the West and a recent diplomatic spat over an attack on a ship.

Iran's economy has suffered due to US sanctions, which has led to the crash of the Iranian riyal and hit ordinary people hard.

"The nation needs competent, effective and brave management," he said.

To make things worse, the coronavirus has spiraled out of control, with authorities reporting a record of 39,000 new cases on Tuesday - almost 2,000 more than the previous day.

Iran has recorded a total of more than 3.9 million virus cases and 91,785 fatalities - the highest death toll in the region.

Future of accord in doubt

Raisi also comes to the job facing doubts about an imminent return to the Joint Comprehensive Plan of Action (JCPoA), the agreement between Iran and the "P5+1" (the permanent members of the UN Security Council -US, UK, France, Russia and China- plus Germany), which granted Iran sanctions relief in exchange for limits on its nuclear program.

The collapse of the nuclear agreement after former President Donald Trump withdrew the US from the accord three years ago doomed the relatively moderate administration of outgoing President Hassan Rouhani, who has seen his popularity plummet. Rouhani himself sat stone-faced throughout the endorsement ceremony.

US President Joe Biden has pledged to rejoin the landmark nuclear accord and lift sanctions if Iran moves back into compliance with the agreement.

Last week, Khamenei delivered a harsh rebuke of the West, blaming the delay of the deal's revival on America's "stubborn" negotiating stance. While repeating his usual anti-West rhetoric on Tuesday about Iran's "enemies" seeking to sway public opinion, Khamenei struck a milder tone during the endorsement ceremony.

Raisi did not specifically comment on the stalled nuclear negotiations in Vienna, but stressed in his speech that he would "pursue the removal of oppressive sanctions" in order to salvage the crippled economy.

"We will not (tie) the people's dining tables and the economy to the will of the foreigners," he said.

Raisi won a landslide victory in the June election, which saw the lowest turnout in the Islamic Republic's history. He will take the oath of office in an inauguration ceremony Thursday before parliament.

But escalating tensions in the Middle East now risk complicating the diplomatic choreography. The West has blamed Iran for a drone attack last week that struck an oil tanker linked to an Israeli billionaire off the coast of Oman, killing two crew members.

Iran has denied involvement in the incident, which marks the first-known fatal assault after a years long shadow war targeting commercial shipping in the region.

Born in 1960 in the holy city of Mashhad in northeastern Iran, Raisi rose to high office as a young man.

Aged just 20, in the wake of the 1979 Islamic revolution that toppled the US-backed monarchy, Raisi was named prosecutor-general of Karaj, which neighbours Tehran.

For the exiled opposition and rights groups, his name is indelibly associated with the mass executions of Marxists and other leftists in 1988, when he was deputy prosecutor of the Revolutionary Court in Tehran.

Asked in 2018 and again last year about the executions, Raisi denied playing a role, even as he lauded an order he said was handed down by the Islamic republic's founder Ayatollah Ruhollah Khomeini to proceed with the purge. The controversial Paris-based exiles National Council of Resistance of Iran, the political wing of the People's Mujaheddin, a group that was targeted by Tehran, call him a "butcher" who they say was "responsible for the massacre of 30,000 political prisoners in the summer of 1988."

In 2019, the US placed Raisi and others on a sanctions list citing the executions and other alleged rights abuses -- charges Tehran dismissed as symbolic.

He studied theology and Islamic jurisprudence under Khamenei and, according to his official biography, has been teaching at a Shiite seminary in Mashhad since 2018.

In 2016, Khamenei put Raisi in charge of a charitable foundation that manages the Imam Reza shrine in Mashhad and controls a large industrial and property asset portfolio.

Three years later, Khamenei appointed him head of the Judicial Authority. Raisi is also a member of the assembly of experts who select the supreme leader.

He is married to Jamileh Alamolhoda, an educational sciences lecturer at Tehran's Shahid-Beheshti University. They have two daughters.