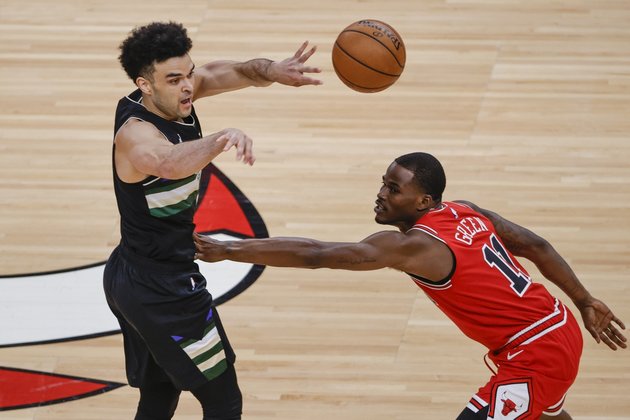 Thaddeus Young finished with 20 points and seven rebounds to help the host Chicago Bulls finish their season with a 118-112 victory over the playoff-bound Milwaukee Bucks on Sunday night.

Young was one of six Bulls who scored in double figures as Coby White totaled 19 points, five rebounds and five assists while Lauri Markkanen had 17 points and five rebounds.

Each team sat some of their regulars as Nikola Vucevic did not play in the final game of a disappointing season for the Bulls (31-41) following his acquisition from the Magic at the trade deadline.

Locked into the No. 3 spot in the Eastern Conference after the Brooklyn Nets' victory over the Cleveland Cavaliers earlier in the evening, the Bucks (46-26) rested all of their starters -- Giannis Antetokounmpo, Khris Middleton, Brook Lopez, Jrue Holiday and Donte DiVincenzo.

Middleton was the only one listed on the NBA's injury report as sitting out with left ankle soreness. Bryn Forbes and Bobby Portis also did not play.

Jordan Nwora totaled 34 points and 14 rebounds -- both career highs -- to lead the Bucks, who will face the sixth-seeded Miami Heat in the first round of the playoffs. The Heat eliminated the Bucks in the second round last season in five games.

Chicago missed the playoffs for the fourth straight season and for the fifth time in the past six years. It's the team's longest postseason drought since a six-year absence following the end of the Michael Jordan era.

Jeff Teague had 23 points for Milwaukee. Elijah Bryant scored 16 points while Pat Connaughton had 15 points and Mamadi Diakite had 13 points and seven rebounds.