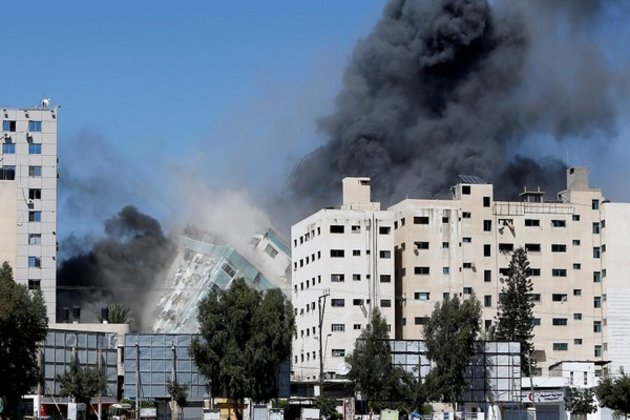 Gaza [Palestine], May 16 (ANI): Israeli warplanes on Saturday destroyed a building in Gaza City with offices of various media groups, including Al Jazeera and the American Associated Press.

The 13-story building, one of Gaza's oldest multi-storey buildings, had a total of 60 units, including offices of media companies, legal firms, and doctors.

Offices of Mayadeen Company for media services, radio station of Voice of Prisoners, and Doha Media Center were among the media offices destroyed by the Israeli shelling, reported Anadolu News Agency.

At least 139 people, including 39 children and 22 women, have been killed and 950 more injured in the Israeli attacks on Gaza.

The conflict between Israel-Palestine escalated after Israeli forces raided the Al-Aqsa Mosque in Jerusalem amid eviction protests, which left scores of Palestinians and police officers wounded.

Over 70 Palestinians in total are set to be evicted from Sheikh Jarrah in the coming weeks to be replaced by right-wing Jewish Israelis, reported The Times of Israel. (ANI)