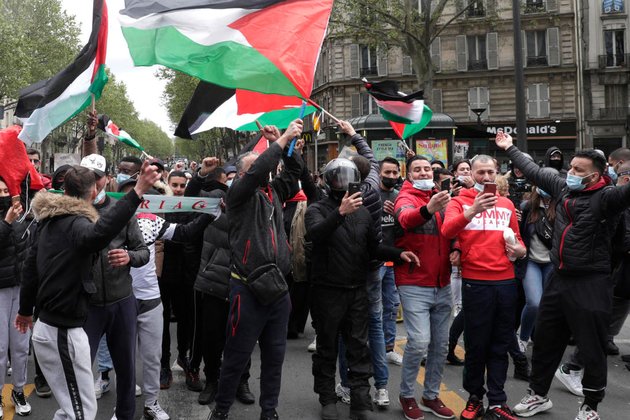 Police in Paris on Saturday fired tear gas and aimed water cannons at protesters defying a ban on marching against Israeli attacks on Gaza, dispersing demonstrators gathering in groups of several hundred. Paris police said they made 44 arrests and that one officer was injured breaking up a gathering of protesters.

Police had banned the march, and a court upheld the decision, fearing a repeat of fierce clashes that erupted during a similar Paris demonstration during the last Israel-Palestinians war in 2014, when protesters took aim at synagogues and other Israeli and Jewish targets.

"We all remember that extremely troubling protest where terrible phrases like 'death to Jews' were yelled," Mayor Anne Hidalgo told AFP on Friday, welcoming the "wise" decision by the police to ban the march.

But protesters turned out anyway, waving Palestinian flags and attempting to join up with disparate groups of demonstrators.

"We refuse to silence our solidarity with the Palestinians, and we will not be prevented from demonstrating," the organisers of the Paris march - the Association of Palestinians in Ile-de-France, the wider Paris region, and other groups said in a statement.

They include anti-fascist associations, the citizens' activist group Attac and the far-left New Anti-Capitalist party.

A lawyer for the groups, Sefen Guez Guez, denounced the police ban as "disproportionate" and "politically motivated."

The police department warned on Twitter that anyone taking part would face fines of 135 euros ($165).

The protest had originally been called to mark the Nakba, as Palestinians call the "catastrophe" of Israel's creation in 1948, which turned hundreds of thousands into refugees.

But a Paris court maintained that the "international and domestic context" justified fears of unrest "that could be as serious or even worse than in 2014".

Critics accuse France of being too favourable towards Israel in the latest conflict, which has seen a barrage of rocket fire from Gaza that has been met with Israeli artillery and air strikes.

The ban has caused a split among French politicians, with President Emmanuel Macron's centre-right party and the right-wing opposition supporting the move, but leftists calling it an unacceptable attack on freedom of expression.

Macron's office said he spoke with Israeli Prime Minister Benjamin Netanyahu on Friday, offering his "condolences for the victims of the rocket fire claimed by Hamas and other terrorist groups".

The statement said Macron urged a return to peace and "his concern about the civilian population in Gaza".

France has the largest Muslim population in Europe, with an estimated five to six million people.

It also has the largest Jewish population after Israel and the United States.

(FRANCE 24 with AFP and REUTERS)