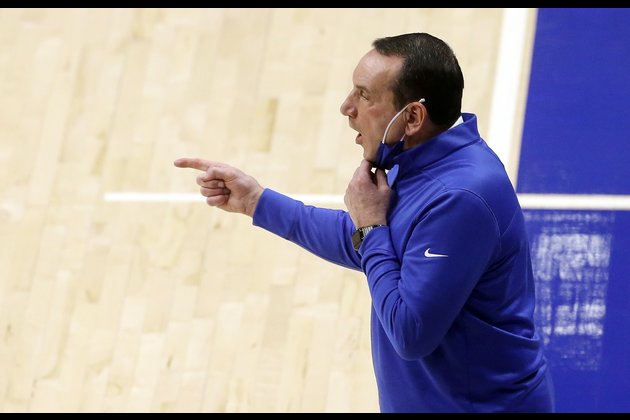 Duke has a lot of work to do if it's going to continue its streak of NCAA Tournament appearances.

It begins with Tuesday's meeting with 15th-seeded Boston College in the first round of the Atlantic Coast Conference tournament in Greensboro, N.C.

"We'll regroup," said Blue Devils coach Mike Krzyzewski, whose team is coming off Saturday night's blowout loss at rival North Carolina. "The thing is you're 0-0, and you get a fresh start."

Duke (11-11) has competed in every NCAA Tournament played since missing the 1995 event -- the season that Krzyzewski went on a midseason sabbatical.

This marks the first time since the ACC expanded beyond nine teams that Duke, which is seeded No. 10, is slated to play on the tournament's first day. It would take five victories in five days in order for the Blue Devils to win the event.

"It's a new season now (with) the ACC tournament," Duke freshman Mark Williams said. "We have Boston College (on) Tuesday and we've got to take it one game at a time and go from there."

Duke is the reigning ACC tournament champion, winning the 2019 version. Last year, the remainder of the tournament was canceled on the day that the Blue Devils were slated to open play in the quarterfinal round.

Krzyzewski said going to Greensboro, where the tournament has frequently been contested, might be a good tonic. The event was slated for Washington, D.C., until the move was made because of the pandemic.

"I think in order to win, you can't look at the tournament as a whole," Krzyzewski said. "You just have to play your next opponent and that's it, and then win and then try to win again. If you try to look at the whole thing, it can become daunting."

It probably looks more challenging for Boston College (4-15), which has lost six of its last seven games.

"It's a brand-new season," interim coach Scott Spinelli said. "That's how we approach it. ... I think we're playing some of our best basketball right now. That first game you want to be ready for. You don't want to be looking ahead to anything else."

Duke enters the postseason on a three-game losing streak.

"The biggest thing is to believe in ourselves," Williams said. "That's the biggest thing. Everyone's going to be doubting us, but at this point it's us versus everybody."

Only Duke forward Matthew Hurt, who was a first-team selection, was named to any of the All-ACC teams (first, second or third team). Boston College was without a pick.

Duke's Jordan Goldwire was an all-defensive team choice and teammate DJ Steward was tabbed for the all-freshman team.

Duke defeated visiting Boston College 83-82 on Jan. 6 in the lone meeting so far this season.