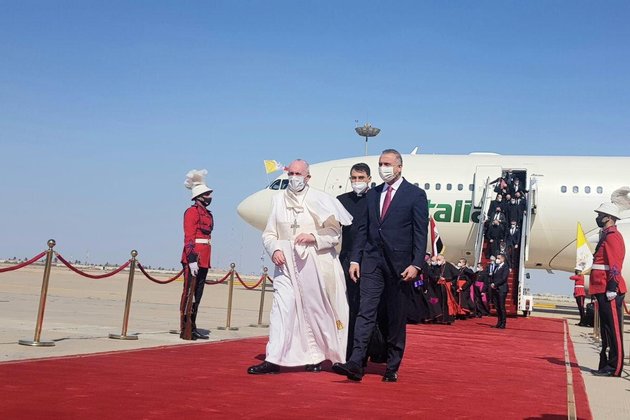 ROME - Pope Francis begins a long-desired trip to Iraq Friday, the first to the birthplace of the Prophet Abraham by any head of the Catholic Church.

It is the first trip by Pope Francis to a foreign country since the pandemic, and everyone on the papal plane has been vaccinated against COVID-19. It will be a challenge all the same, though, as cases in the country have surged and there are fears that those hoping to see the pope will forget the social distancing rules.

The Vatican's ambassador to Iraq, Archbishop Mitja Leskovar, recently tested positive for COVID and is currently self-isolating, but the pope has insisted on going ahead with the visit.

In a video message to the Iraqi people, Francis told them how he longed to meet them, see their faces and visit a land that is ancient and an extraordinary cradle of civilization.

The pope said he was coming to Iraq as a "penitent pilgrim" to implore forgiveness and reconciliation after years of war and terrorism.

In his message, Francis added that he was coming to Iraq "as a pilgrim of peace in search of fraternity, animated by the desire to pray together and to walk together, also with brothers and sisters of other religious traditions, in the land of Father Abraham, who unites Muslims, Jews and Christians in one family."

The pope, who was forced to cancel the trip to Iraq last year, is hoping to bring new encouragement to a Christian community that was heavily persecuted during the Islamic State insurgency. The number of Christians in Iraq has significantly dropped, to around 300,000. The pope referred in his message to a "martyred church" that he will be honored to meet.

He said there have been too many martyrs and that Iraqi people still have in their eyes "the images of destroyed houses and desecrated churches," and in their hearts "the wounds of broken hearts and abandoned homes."

Pope Francis arrives at Baghdad International Airport where a welcoming ceremony is held to start his historic tour in Baghdad, Iraq, March 5, 2021.

Security is also a concern during the papal visit, as attacks have increased in recent weeks on civilian and military targets. The pope is expected to travel in an armored vehicle and not his usual popemobile. Vatican officials have said they are satisfied that Iraqi authorities will be able to provide the required protection for the papal visit.

Francis is planning to visit several Iraqi cities during his visit, including Mosul, Erbil and Qaraqosh where he will meet people rebuilding their communities and churches. He will also visit Ur, the birthplace of the prophet Abraham. One of the highlights of his trip will undoubtedly be when he travels to the holy city of Najaf to meet the Grand Ayatollah Ali al-Sistani, the influential 90-year-old Shia Muslim cleric.

A man takes selfies as he waits for the arrival of Pope Francis, at Baghdad Airport Road, in Baghdad, Iraq March 5, 2021.