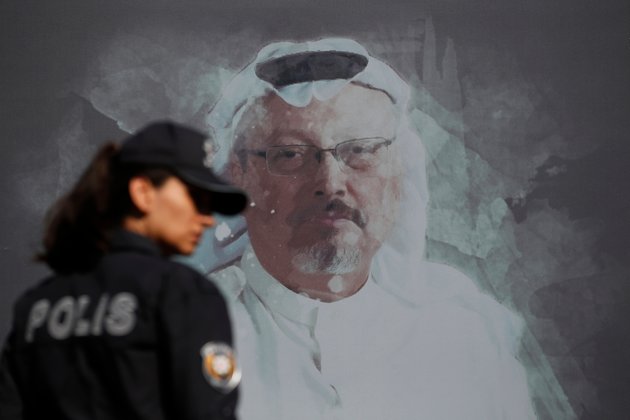 "There will be an announcement on Monday as to what we are going to be doing with Saudi Arabia generally," the president said when a reporter asked about punishing Crown Prince Mohammed bin Salman, Saudi Arabia's de facto ruler.

President Joe Biden speaks to reporters on the South Lawn of the White House in Washington, before boarding Marine One helicopter, Feb. 27, 2021, for the short trip to Andrews Air Force Base, Md., and then on to Wilmington, Del.

Biden took just the one question as he and his wife, first lady Jill Biden, left for Delaware for the weekend. He gave no details.

The administration has come under criticism for not being tougher on the crown prince, despite assessing in a declassified intelligence report released Friday that he approved the killing of Saudi dissident and Washington Post journalist Jamal Khashoggi in the kingdom's consulate in Turkey.

The intelligence report found that Khashoggi was lured to the Saudi Consulate in Istanbul on October 2, 2018, and killed by operatives linked to the crown prince. His body was dismembered, and his remains have never been found. Riyadh eventually said Khashoggi was mistakenly killed in what it called a rogue operation but denied the crown prince's involvement.

"While the United States remains invested in its relationship with Saudi Arabia, President Biden has made clear that partnership must reflect U.S. values," Secretary of State Antony Blinken said in a statement.

FILE - Secretary of State Antony Blinken speaks during a virtual meeting with Mexican Secretary of Economy Tatiana Clouthier, who is in Mexico City, Feb. 26, 2021, in the Benjamin Franklin room at the State Department in Washington.

"To that end, we have made absolutely clear that extraterritorial threats and assaults by Saudi Arabia against activists, dissidents and journalists must end. They will not be tolerated by the United States," Blinken added.

The report said the intelligence community based its conclusions on the fact that the prince is known to exert tight control over decision-making in the kingdom, and on his support for using violence to silence dissidents abroad.

Khashoggi, a Saudi citizen, was a legal U.S. resident and had written op-ed columns for the Post that were critical of the crown prince. He had four adult children, at least two of whom are American citizens, according to the Post.

The report prompted the Biden administration to announce visa restrictions against 76 Saudi citizens. Blinken said they were "believed to have been engaged in threatening dissidents overseas, including but not limited to the Khashoggi killing."

"These persons are designated pursuant to Executive Order (E.O.) 13818, which builds upon and implements the Global Magnitsky Human Rights Accountability Act and targets perpetrators of serious human rights abuse and corruption around the world," the Treasury statement said.

Treasury Secretary Janet Yellen said, "The United States stands united with journalists and political dissidents in opposing threats of violence and intimidation. We will continue to defend the freedom of expression, which is the bedrock of a free society."